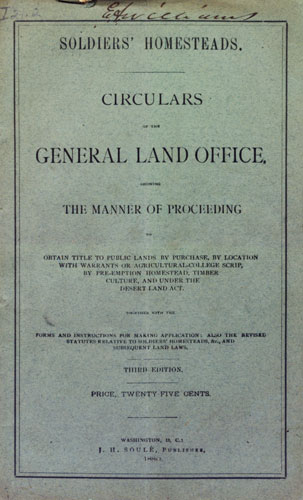 Soldiers’ Homesteads. Circulars Of The General Land Office. Showing The Manner Of Proceeding To Obtain Title To Public Lands By Purchase, By Location With Warrants Or Agricultural-College Scrip, By Pre-Emption Homestead, Timber Culture, And Under The Desert Land Act. Together With The Forms And Instructions For Making Application: Also The Revised Statutes Relative To Soldiers’ Homesteads, &c., And Subsequent Land Laws. Third Edition, (Washington, DC: J.H. Soulé, Publisher, 1880), 29 pp.

This booklet served as a guide to prospective settlers and land agents. This copy was owned by Erastus A. Williams.

Pre-Emption Entry
1841
Some intrepid individuals settled in northern Dakota before the government was organized. They were living on the land before the General Land Office officially sold or even surveyed the tract, and were thus given a pre-emptive right to acquire the land from the United States. A law passed by the Unites States government in 1841 allowed a person on the land (squatter) the first claim to 160 acres of unsurveyed land. The price of $1.25 per acre was due as follows: filing fee of twenty-five cents an acres with the balance due eighteen months later.

Desert Land Act
March 3, 1877
The Desert Land Act of 1877 was designed to foster settlement of the arid and semi-arid regions of the west, specifically in Arizona, California, the Dakotas, Idaho, Montana, Nevada, New Mexico, Oregon, Utah, Washington, and Wyoming. The Act allowed anyone to purchase 640 acres of land for 25 cents per acre if the land was irrigated within three years of filing. A rancher could receive title to the land any time within the three years upon proof of compliance with the law and payment of one additional dollar per acre. The homestead files of cattle ranchers in the region west of the Missouri River contain documents of proof related to the Desert Land Act and Timber Culture Act.

Agricultural College Scrip
Lincoln signed the Morrill Act on July 2, 1862, giving each state a minimum of 90,000 acres of land to sell, to establish colleges of engineering, agriculture, and military science. To support the agricultural colleges, these certificates were sold and allowed a person to purchase 160 acres at $1.25 per acre. There was a limit of three sections, or 1,920 acres in each township.

Soldiers’ Homestead
Sections 2304 to 2309 of Revised Statutes of United States
As a benefit to Civil War veterans, this act, an extension of a benefit to veterans of the War of 1812, allowed a soldier, officer, or seamen, who had served for at least 90 days in the Army, Navy, or Marines of the United States during the War of the Rebellion, to take up 160 acres on surveyed lands, even within the 40 mile trans continental railroad corridor.

Indian Homestead
March 3, 1875
To encourage Indians to engage in farming this act provided 160 acres to the 21 year old, head of household, provided “that he has abandoned his tribal relations and adopted the habits and pursuits of civilized life.”