. . . . the grants to railway companies of alternate sections of land upon the contemplated issues of their roads, which when completed will so largely multiply the facilities for reaching our distant possessions.
Abraham Lincoln, December 8, 1863, Third State of the Union Address.

The great enterprise of connecting the Atlantic with the Pacific states by railways and telegraph lines has been entered upon with a vigor that gives assurance of success; notwithstanding the embarrassments arising from the prevailing high prices of materials and labor.
Abraham Lincoln, December 6, 1864, Fourth State of the Union Address. 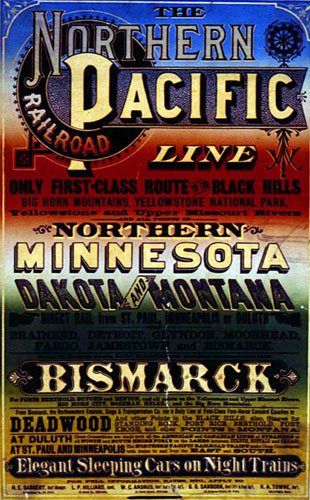 This Northern Pacific Railway Broadside, ca. 1875, is an advertisement for routes available from Bismarck, DT.