In the month of August last the Sioux Indians in Minnesota attacked the settlements in their vicinity with extreme ferocity, killing indiscriminately men, women, and children. This attack was wholly unexpected, and therefore no means of defense had been prodded. It is estimated that not less than 800 persons were killed by the Indians, and a large amount of property was destroyed. How this outbreak was induced is not definitely known, and suspicions, which may be unjust, need not to be stated. . . . . The State of Minnesota has suffered great injury from this Indian war. A large portion of her territory has been depopulated, and a severe loss has been sustained by the destruction of property. The people of that State manifest much anxiety for the removal of the tribes beyond the limits of the State as a guaranty against future hostilities.
Abraham Lincoln, December 1, 1862, Second State of the Union Address 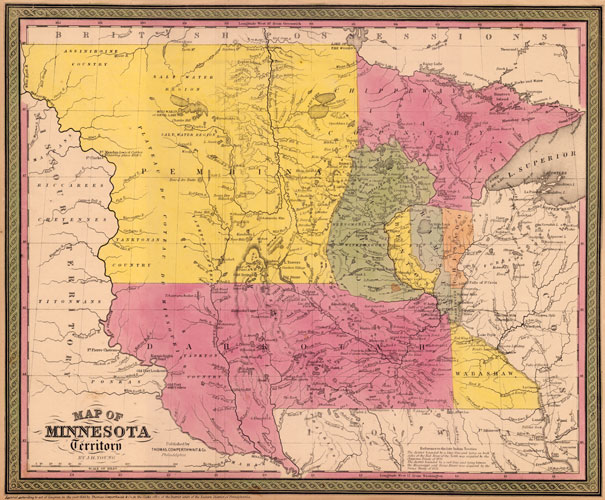 In 1862, warfare broke out in Minnesota between the Santee or Eastern Dakotas and the United States over a long litany of broken government promises and increased white settlement on Indian land. On August 17, 1862, a series of skirmishes along the Minnesota River and elsewhere claimed many hundreds of settlers’ lives and an unknown number of Santee. Battles at places like New Ulm, Ft. Ridgely, Birch Coulee, and Wood Lake generated considerable national attention.

Food and other annuities were due the Dakota under treaties whereby they had ceded land in Minnesota to the United States. A local crop failure in the fall of 1861, followed by a hard winter, was exacerbated by the failure of government payments and supplies to arrive during the spring and summer of 1862.

Like a destructive storm, the war struck suddenly and spread rapidly. Everything was confusion. It was difficult to know who was friend and who was foe. Little Crow divided some white women and children who found it difficult to escape among his friends to protect them from the renegades. The Indians raided farms to get food for the refugees. One day a large group of soldiers attacked them and they were forced to fight.
Esther Wakeman, or Mahpiyatowin, meaning Blue Sky Woman, (1845 - ?)