Courtesy of a private collection

Abraham Lincoln was first memorialized on postage stamps in 1866. Lincoln first appeared on paper currency in 1874, on the 50 cent bill.

Letter mailed on March 30, 1870, from Yankton, Dakota Territory to the Prussian province of Schleswig - Holstein, on the border with Denmark. The international postal rate was fifteen cents. This is the only known example of this stamp, the first stamp to feature Abraham Lincoln, from Dakota Territory.

Shortly after Lincoln’s death, the National Lincoln Monument Association was created to build a Lincoln monument. Built between 1870 - 1874 as a monument over the tomb of Abraham Lincoln and Mary Todd Lincoln, it is filled with bronze sculptures depicting aspects of Lincoln’s life. Lincoln the Soldier, by sculptor Leonard Crunelle, decorates Lincoln’s tomb in Springfield, Illinois. Crunelle also created the sculpture of Sakakawea on the Capitol Grounds, Bismarck.

Enos Stutsman, a Lincoln appointee in Dakota territorial government, would be dead within a year of giving this donation to the Memorial fund.

In 1909 the nation observed the centennial of Abraham Lincoln’s birth. The Post Office Department issued a commemorative postage stamp and the Bureau of the Mint redesigned the penny. In addition, numerous busts, statues, and items were made to commemorate the event.

This is a watch fob made for the Abraham Lincoln Centennial. On the back of the fob is a log cabin, rising sun, and the dome of U.S. Capitol. The notations Emancipator of a Race and Savior of the Union reflect Lincolns achievements while in office. 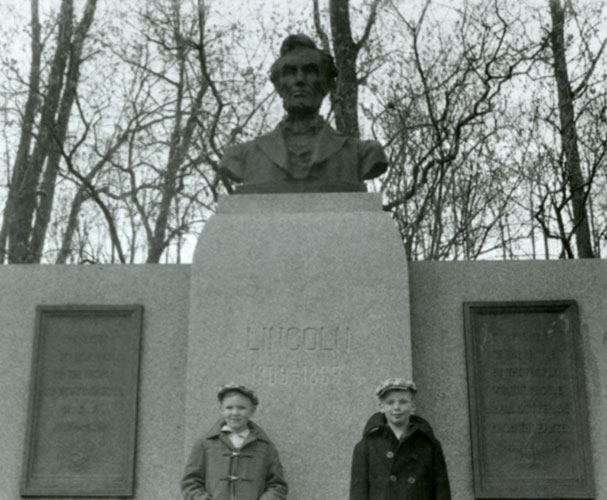 In 1914 Norwegian-Americans in North Dakota and Minnesota commissioned Paul Fjelde of Valley City to create a bronze bust of Lincoln for Christiania, (later renamed Oslo), Norway. Replicas are at the courthouse in Hillsboro, ND, and the library at Valley City State University. Governor Hanna, his family, and a committee went to Norway, and on July 4, 1914, at Christiania, they presented the people of Norway with the bust of Abraham Lincoln, created by Paul Fjelde. Later, King Haakon VI of Norway decorated Governor Hanna with the Grand Cross of Saint Olaf of the First Rank.

Edwin G. Clapp III and James S. Clapp, the great-grandsons of Governor Louis B. Hanna, are standing in front of this monument erected by citizens of North Dakota.